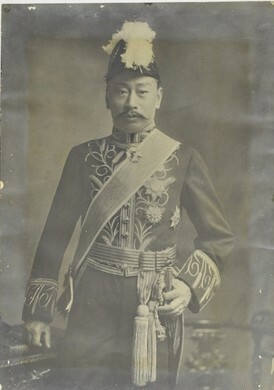 Came to US in 1875 at the age of 13 with the 4th group of China Educational Mission Students.

was interpreter at the Chinese consulate in New York

1882 Translator at Chinese Consulate in New York; 1884 transferred to Chinese Legation in Washington

1897 January - 1899 May: Acting Consul General, then Consul General in Singapore, with concurrent responsibility for Penang, Malacca and nearby islands2;

1897 Secretary to Chinese Minister in London for Queen Victoria's Diamond Jubilee, after which he travelled with the embassy to Europe and America (Straits Times, 1899.8.30);

1900 Secretary at Chinese Legation in London

1910 Aug. 31 appointed 1 of the 3 plenipotentiary representatives of China to the International Opium Conference to be held at The Hague in May, 1911 (1911.3.3 Papers Relating to the Foreign Affairs of the United States: China, p. 325);

1910 September appointed Minister to Great Britain; assumed post in December;
At an unknown date after the Qing regime ended, he was appointed Minister of The Republic of China to London until 1914, when Liu retired from diplomatic service;

1912 Aug. 30: "His Excellency Lew Yuk Lin, the Chinese Minister to the Court of St. James in London duly authorized and acting for and on behalf of the Republic of China" signed a £10 million gold loan from C. Birch Crisp & Co. of London, on behalf of the Chinese Government.