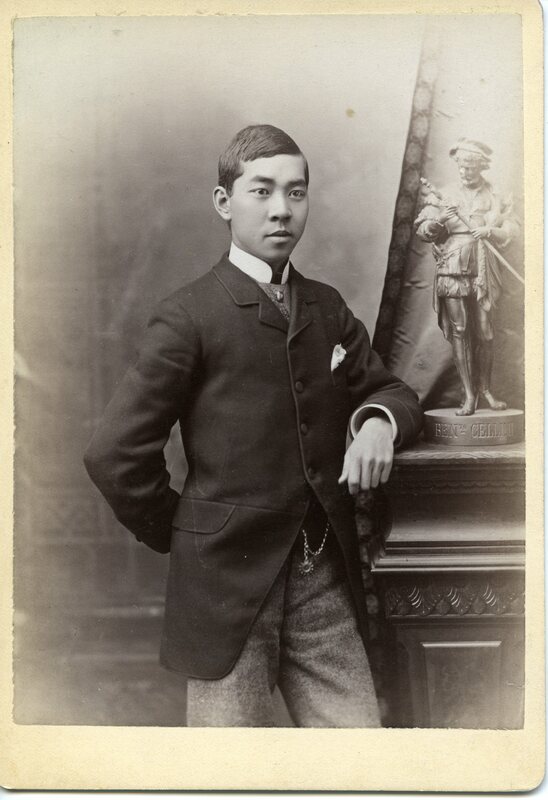 Chow at his graduation in Phillips Academy in 1881

College: Columbia University (only there a few months when CEM group recalled)

Came to US with 1874 C.E.M. group at age 14; went to grammar school in Winstead, Connecticut, then P.A.; gave English Oration at Commencement "The Opium War"; after returning to China was sent to Korea and worked in Customs until 1894 and the Consular Service until 1897; returned to China and managed China Merchants Steamship Navigation Company until 1903; then Director of the the Mukden RR; 1907 Customs Commissioner in Manchuria; 1910 Consular in Foreign Office in Peking; 1917 Justice of the Peace in Hong Kong; 1921 Hong Kong Legislative Council; 1926 knighted and on Hong Kong Executive Council; 1922 address 45 Robinson Rd, Hong Kong

Chow returned to China because of the abrupt recall of the Chinese Educational Mission in 1881 and worked in the Chinese government. He later became the high ranking government official who took charge of Chinese railroads and built a railroad college. After Qing Dynasty ended in 1911, he moved to Hong Kong and became a prominent businessman and philanthropist. He was very active in public service.

He established Bank of East Asia in 1918. He then served on various boards such as the Sanitary Board and  board of trustees of University of Hong Kong. During the Japanese Occupation, he served as the chairman of the Chinese Cooperative Council to maintain public order among the Chinese.

Shouson Hill, in the south of Hong Kong Island, is named after him.