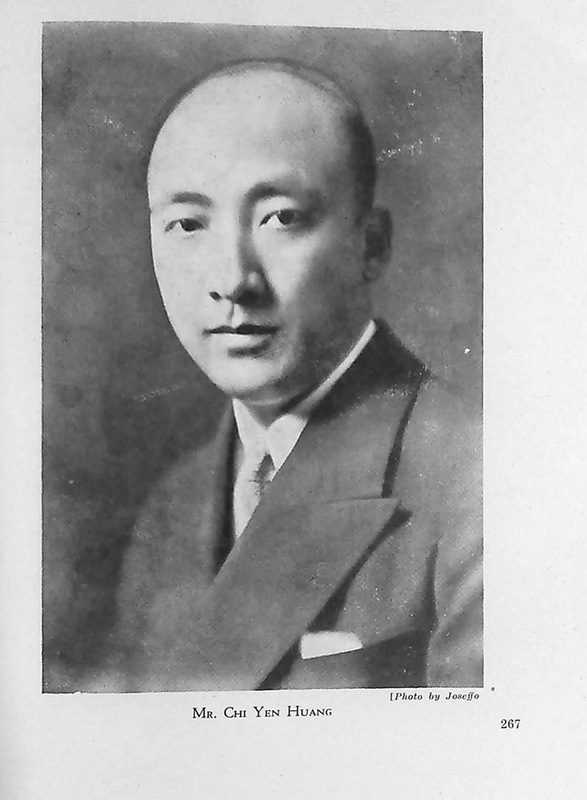 The information below is from Institute of Modern History, Academia Sinica

Receiving his technical education as a Civil Engineer at the foremost educational institutions of the United States, Mr. Huang has been engaged in professional work since 1922 as Proprietor of Kin Wah & Co., a prominent Shanghai firm of building contractors. He has many other business interests, however, and has also had a notable career in government service. Prior to his return to China from the United States he was employed in America, with the Boston & Maine Railway, 1918-19, and the great engineering firm of Stone & Webster, 1919-20.

Mr. Huang was a member of the Executive Committee of the Shanghai Chamber of Commerce, 1925; Vice Director, Kiangsu Rolled Tobacco, Kerosene and Gasoline Tax Bureau, 1928; Technical Expert, Tariff Commission of the National Government at Nanking, 1928-29; Technical Expert, Ministry of Finance, 1929; Director, Stamp Tax Bureau of Kiangsu Province and concurrently Director of the Stamp Tax Bureau for the International Settlement of Shanghai, 1929-30, and Director General of the Wine, Tobacco, and Stamp Tax Administration, Ministry of Finance at Nanking, 1930-32.

Indicating the range of his business interests, Mr. Huang is a Director of the Peking and Nanking theaters of Shanghai, the Lakewiew Hotel of Hangchow and the Great China Co. of Shanghai.