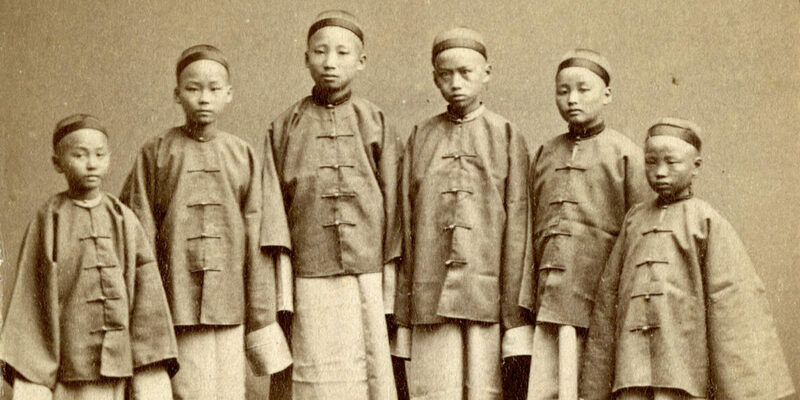 From 1872 to 1881, 120 Chinese young boys at different ages arrived in the U.S. on government sponsorship. Chinese Educational Mission was a pioneering but frustrated attempt of China to modernize Chinese education and industry. At that time, the U.S. was scarcely a world leader in education. Although the United States was industrializing and urbanizing quickly, it was in turmoil during Reconstruction (following the American Civil War), and its educational institutions were not as advanced as European ones. Yet, China chose the U.S. to train its first groups of students abroad because of two people.

The first was Anson Burlingame. He was the American minister to China (and then China’s envoy to the U.S.) who led to the landmark treaty in 1868 between China and U.S.—Burlingame Treaty—to grant China most favored nation in 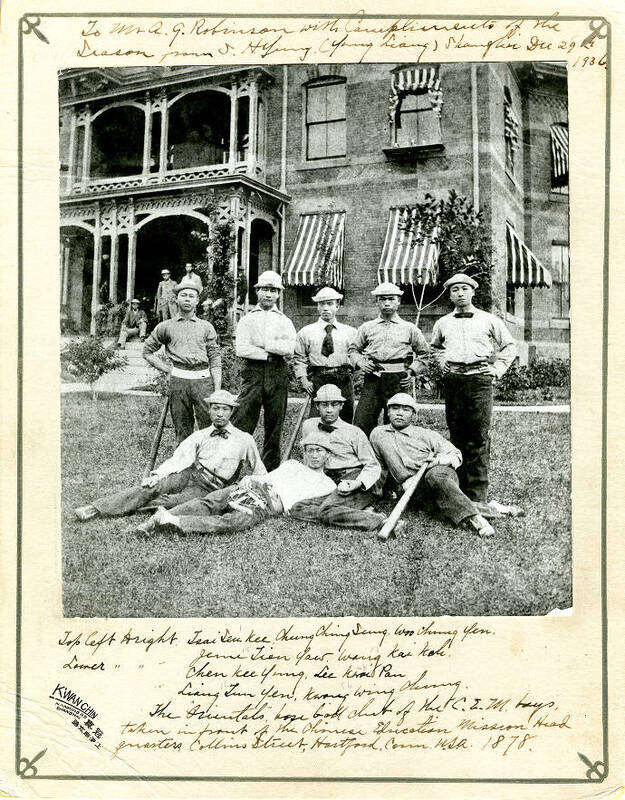 trade, lift restrictions on Chinese immigration and allow Chinese subjects to enjoy the same privileges and immunities in the U.S. as those of American citizens in China, including education. The second key person was Yung Wing, the first Chinese student to graduate from an American college (Yale, 1854). He argued strongly that China should send students to the U.S. and turned the Burlingame Treaty into reality by establishing the Chinese Educational Mission.

The Chinese boys, after arriving in the U.S., received an overwhelming welcome. Nearly 150 representing “the best Christian families” showed interest in hosting the boys, but only a portion of them were accepted for the first group of students. These students adapted themselves quickly. They dressed like Americans, excelled in academics, did well in sports and social life and were interested in Christianity. This American way of life angered many conservative Chinese officials in the court and caused the early recall of the Chinese Educational Mission. The upcoming passage of the Chinese Exclusion Act (1882) and the failed admission to military colleges, such as West Point, also angered Chinese officials. At the time of the recall in 1881, 43 students were in college. Twenty of them were at Yale, others were at Harvard, MIT or Columbia.

Among the 120 students sent to the U.S., eleven (Hon Yen Chang '79, Ting Liang Ho '79, Ying Fo Woo '80, Sui Nam Yang '80, Shouson Chow '81, Yen Chi Chuck '81, Yuk Lin Liu '81, Yuen Fai Lin '82, Yuen Shing Lin '82, Liang Cheng '82, Sik Shao Chu '84) attended Phillips Academy in Andover. With their American education, they pioneered many industries in China and thus laid the foundation of Chinese modernization. To name a few, Liang Cheng (Phillips Academy class of 1882) served as the Chinese Minister to the U.S. (1902-1907), and negotiated the Boxer Indemnity Scholarship, arguably the most consequential and successful in Chinese study abroad movements in the twentieth century, that funded more than one thousand Chinese students to the U.S. He was also the founder of Tsinghua University, which was a preparatory school for American universities but today dubbed the “Chinese MIT.” Yuk Lin Liu, the Chinese minister to Britain (1910-1914), together with Liang Cheng, emulated the American revolutionary spirit by urging the emperor to declare China a republic. Hong Yen Chang, Phillips Academy class of 1879 was the first Chinese lawyer in the U.S. In 2020, Columbia University named the Chinese Legal Studies Center after him, in honor of his perseverance and contribution. Other Phillips Academy alumni served as leading doctors, military officers, engineers, and businessmen who were all pioneers in their professions. However, they were so few in number they barely changed the broader picture of China.

The mission of 1868, Chinese embassy, photographed by J. Gurney & Son, Prints & Photographs Division, Library of Congress, ds.06802. Anson Burlingame, at the center, is shown flanked by Zhigang and J. McLeavy Brown on his right and Sun Jiagu and E. de Champs on his left. Zhang Deyi is fourth from the right, and Fengyi is fourth from the left.