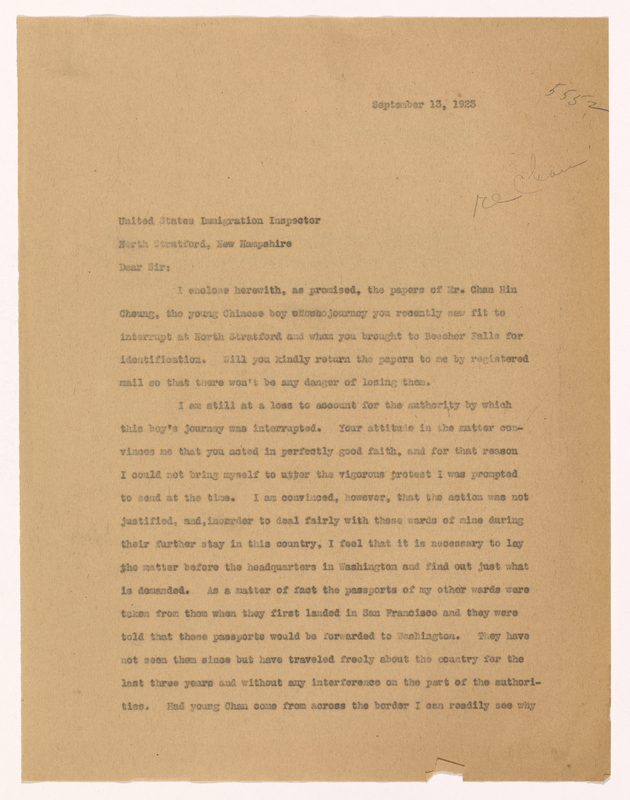 Besides the highest standards of character and scholarship he provided to the Chinese students, Stearns also served as a protector of Chinese students against racism. The Chinese Exclusion Act in 1882 and Immigration Act of 1924 barred Chinese and Japanese from immigrating to the United States. Though the Chinese Exclusion Act gave exemptions to businessmen, teachers, students and travelers, the immigration officers still made it an excruciating and humiliating experience for these people to enter the U.S. Very often they were questioned for a long time or detained without reason, and their passports confiscated. Even diplomats were not spared from such abuses. The bad experience at customs was so notorious that many students shunned the U.S. and went to other countries. More than two hundred Americans in Shanghai petitioned the American government to warn of this drift of “desirable classes of Chinese to other countries.”[1]

Stearns, as the head of the school, often wrote to the immigration service testifying to the students’ identity and urging them to release the students. He protested abuses of power and threatened to bring this issue up in Washington. When his students received racist insults on the street, he lent his support, educated the students on universal brotherhood and encouraged them to continue their education. When one of his wards, Mary Sun, told him her interesting nursing experience with Italian immigrants and African American babies, Stearns was very pleased with her egalitarianism (see here).

". . . .it takes just those straight human contacts to bring home to our stupid hearts the clear truth that the color of the skin counts very little, if anything in the Almighty's plans for the human race."

In his speech to the Chinese Students Conference that took place at Phillips Academy in 1907, Stearns apologized for the “prejudice and selfishness” that had “dictated policies and actions at variance with the American ideals and against which the true Americans cry out in protest.” And he assured the students they would receive in universities “American ideals best exemplified…and your students are gladly welcomed.”[2]